Last year, the holiday season kicked off with a flight home to Canada. After 3 or 4 months of living in Madrid, I was ecstatic to spend two weeks with my parents, brother, sisters, and brother-in-law – it was exactly the kind of break I needed from my new home. This year, I decided to visit my family again. However, this trip took me to Germany (and, very briefly, to Holland) instead. From finding my footing in Frankfurt to being blown away by Berlin, it was the adventure that I needed to finally feel fulfilled again. 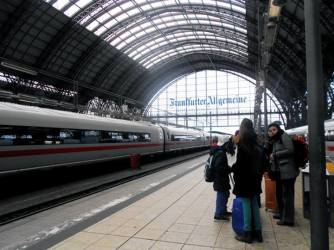 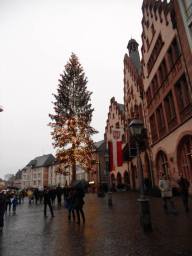 It’s no secret that I’m not Madrid’s biggest fan. While I love the city in many ways, I often need some time away to appreciate its upsides again. Thus, it only seemed to make sense to book an early flight to Frankfurt, where I met some family on my mother’s side. Frankfurt, like Madrid, is an important city. On the flip side, it’s much more calm, and definitely doesn’t have a capital city feel to it. The city didn’t shock me in any way, and instead reminded me of some parts of London that I had visited a few months before. Frankfurt’s airport and train station are – of course – main reasons why Frankfurt is a hub for travelers. After a few days of Christmas-related family visits and a slight bit of sight-seeing through Frankfurt’s quaint center town, I was off to see Berlin for five days. Despite enjoying Frankfurt’s familiarity, I was excited to hop off to Germany’s biggest city, which also happened to be its capital. I had about four hours to think about it, as I hadn’t really done much research on what to see in Berlin beforehand. My trip, via Germany’s Bahn (train), was a smooth ride, making me fall in love with Germany’s train system. Not only are people incredibly nice on the train (I had multiple travelers help me with my suitcase), it’s surprisingly laid back whilst also being well-organized. Upon arriving in Berlin, I met my father’s side of the family, who – like me – were ready to hit the town and get started on seeing the sights. I felt incredibly blessed to have such wonderful hosts, considering I eventually saw everything there was to see in Berlin, and from the local’s point of view. For travelers, seeing a city this way is, in my opinion, the best way to go. Over the course of the next couple of days, I walked all around Berlin’s center town (known as “Alexanderplatz”), seeing the famous Berliner Dom, Museum Island, the Synagogue, the Reichstag (Parliament), the train station, the river, the Jewish Holocaust memorials, the West side of Berlin (as my hosts live in East Berlin), as well as more residential areas. 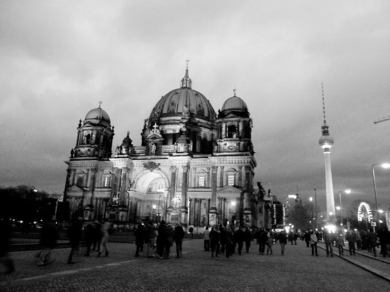 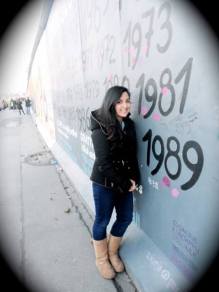 By the Berlin Wall.

Berlin inspired me in a way no other city in Germany did. In fact, Berlin inspired me in a way most cities I’ve visited haven’t been able to. There’s something about Berlin that’s hard to put in words. It’s definitely no Paris in terms of posh looks, but its grittiness is what attracts me to it. It has an edge, while also being a beautiful city. Berlin has character, history, and for some reason, it feels much more honest to me than most cities I’ve been to do. In addition, there are several Cold War-related memorials around the city, which for me, was another reason to love it. I’ve always been fascinated by the Cold War for several reasons. Firstly, I’ve always been interested in politically-charged historical events, especially those involving communism. Secondly, I have familial ties to the war, having lost an important elder to the cause against communism. Thirdly, and possibly the most ridiculous reason, I was born around the time of its figurative destruction. Interestingly enough, the Wall was also created around the time of my mother’s birth. As trivial as it may sound, for some reason, I think it plays a part in my interest. As such, my visit to the Wall was one of amazement – I couldn’t keep myself from feeling a sense of humility, and appreciation for the freedom and rights I’ve been gifted throughout my life. For this reason, leaving Berlin was one of the hardest city departures I’ve ever had to make. I’ve promised myself that I’ll return – probably in spring time – as it’s the kind of city that needs to be seen more than once. 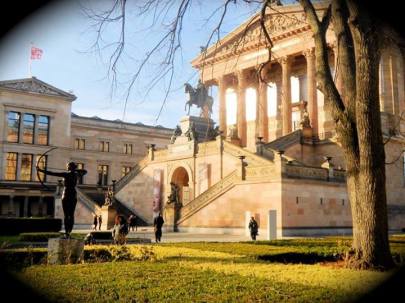 Another thing to like about Berlin is how easy it is to get around the city. Between the underground (metro), S-Bahn (Germany’s tram), bus, and train system, getting from point A to point B is even easier in Berlin than it is in Madrid. As I’ve mentioned before, the public transportation system in Madrid is one of the best in the world, and I’ve had a hard time finding a system that surpasses it. Berlin’s system, however, may have done just that. As such, travelers will be happy to know that Berlin is easily navigated, though there isn’t really a 10-pass trip deal as there is in Madrid. Day tickets (that allow unlimited travel on all systems) are only about 5-6 euros, however, which is great for those days you feel like moving around a lot! 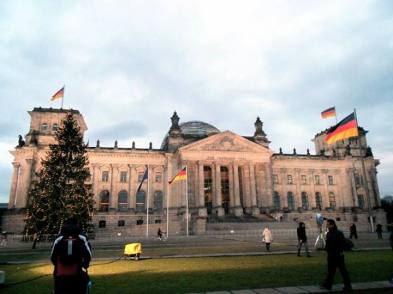 Now, upon the realization that I was to leave Berlin (on New Year’s Eve, no less), I began to get a taste of bittersweet. On the one hand, leaving Berlin is no easy task, especially on a day Berlin’s well-known for (seriously, who else would leave the city on New Year’s Eve?!). On the other hand, I was to take a train to Hamburg, where I was going to meet a good friend I had spent much of my first year in Madrid with. My friend, who is German, thought it would be a good idea to meet in the area (where she hails from). Later, we took a slightly spontaneous road trip up to her university town of Groningen (a northern city in Holland). For me, a Canadian who’s used to the extremely dramatic Canadian-U.S. border, it was shocking to make an extremely drama-free cross into Holland from Germany’s autobahn. Despite the not-so-exciting border, being able to fulfill a childhood dream of driving at almost 200km/hour on Germany’s (mostly) limit-free autobahn was just the kick the adrenaline junkie in me needed. Once we arrived in Groningen, the town’s student vibe made me feel right at home. Though I’ve visited Holland before, I had only really been to Amsterdam (and its surrounding areas on the way to the airport). Amsterdam is similar in that it is also a bike-able city with a canal, but otherwise, the cities don’t have that much in common. Groningen is, as I’ve been told, more typical of northern Holland, and has so many German students that it’s an interesting cross between Holland and northern Germany. Regardless, we later spent our New Year’s Eve in the city center, along with several other 20-something year olds, where we lit up fireworks and had an all-around great start to the new year! 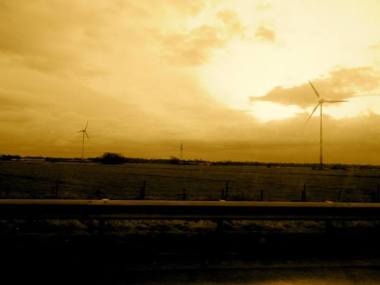 Windmills by the Dutch border. 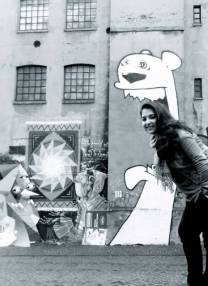 As quaint and enjoyable Groningen was, a couple of days later, we had to make the trip back to Germany. I was happy to see a different side of Holland, but it was nice to know that we would be seeing something new in Hamburg. Hamburg is unlike Berlin and Frankfurt, teaching me how distinctly different German cities can be from one another. Hamburg gives me San Sebastian (a city in Spain) vibes in the way that its a northern city known for being more posh. However, Hamburg is a port city rather than a coastal city, thus making its port the focal point. Its vast river, beautiful buildings, and surprisingly interesting wall art (which, though it wasn’t as awesome as Berlin’s graffiti, was still quite artistic) made it a great visit for a day. It was also the only city in Germany where I stayed in a hostel, which was so large I almost mistook it for a hotel. At the same time, Hamburg has some very “shady” (not just literally) areas, so beware of crossing into these neighbourhoods should you ever make the visit to the city. Hamburg is known for having a unique party district, where bars are combined with strip clubs and generally ugly streets. While some people are into that, I thought it was an ugly version of Las Vegas, and couldn’t wait to go back to its port-side districts. 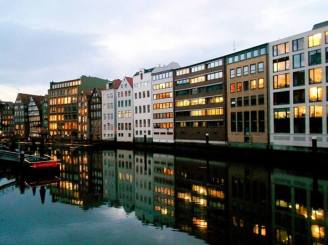 Seeing Maseratis by the water (Hamburg).

After a day, it was time to make my way back to Frankfurt, where I was to take my flight back to Madrid in a couple of days. Once again, the German Bahn made for a smooth ride, and I was back in Frankfurt in no time. Once I got to Frankfurt, I realized that it was time to get on a train again and see the town of Heidelberg. Heidelberg is known as one of Germany’s prettiest towns, with its backyard being the mystical Black Forest. As a lifelong fan of fairy tales, grim or not, I needed to see the area. The wonderful thing was, as I had made sure to buy the Bahn’s 4-day German Rail pass, I was able to hop on any train to Heidelberg (less than an hour away from Frankfurt via train), and get back whenever I wanted. The German Rail pass, which is open to non-Europeans, is a great deal – for 4 days of unlimited travel (4 days to be used within 30 days, thus meaning this travel doesn’t need to be on consecutive days), I was able to see a lot of Germany for about 160 euros. The crazy thing is, one train ticket to Frankfurt to Berlin around this time cost about 130 euros, thus making it a no-brainer. In any case, I made sure to use it as much as possible. The pass gave me great freedom to see Heidelberg for as long as I wanted, which was perfect as Heidelberg makes for a great day trip, particularly for me as it was the only town in Germany I saw whilst alone. As I’ve previously posted on, I’ve always wanted to make a trip somewhere by myself, and while this was merely a few hours spent alone, it gave me a sense of accomplishment. I’ve always been confident in my navigation skills, but testing them in Heidelberg made me realize that just about anything is possible if you decide you can do it. In Heidelberg, I first made my way up to its famous castle, where I sat for nearly an hour whilst looking over the city. This part of Heidelberg was, by far, one of the most breathtaking places I’ve ever been to. I later walked through the town, alongside the beautiful river, making me finally (really) feel as though I was in fairytale Germany. This trip was definitely the best way to end my two weeks in Germany, and while I was sad to leave, I knew that I had spent my time wisely, and was happy that I saw several different cities. 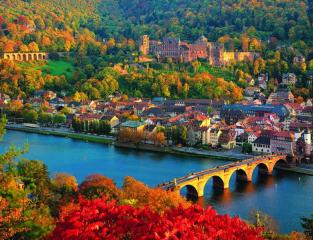 Now that I find myself in Madrid again, I’m already looking at my next big trip for the year. For us English assistants, this is during “Semana Santa” (Easter week) in April. I haven’t quite decided where to go yet, but I have an inkling that it will be somewhere more island-like this time. Until then, Germany’s on my mind.

Have you ever been to Germany? If so, what’s your favourite part? 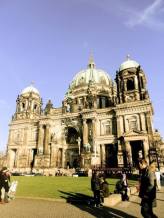 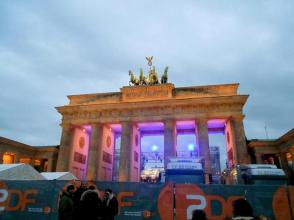 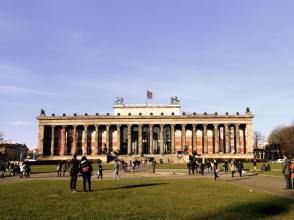 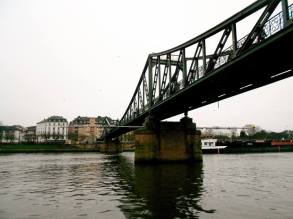 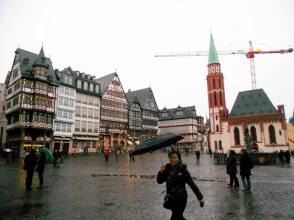 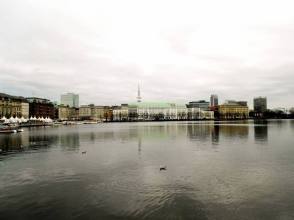 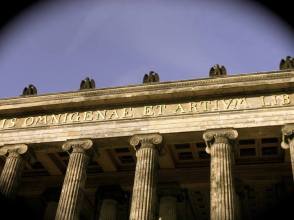 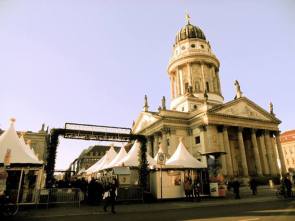 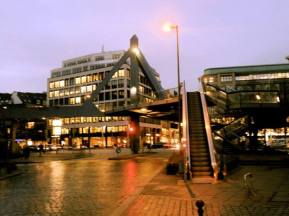 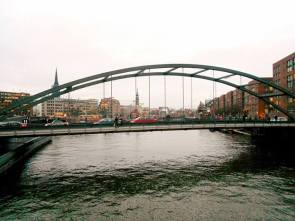 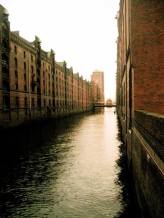 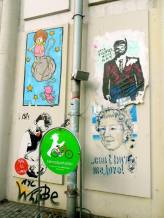 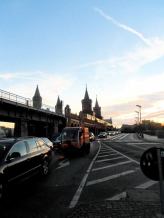 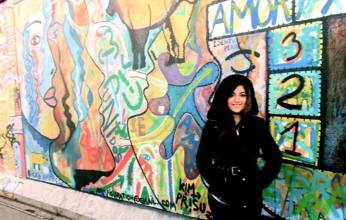