For Canadians, the Olympics are a time of celebration. We’re a country of (normally) level-headed people, for the most part, but when the Olympic Games roll around, we turn into proud nationalists with a serious competitive edge. We like the ones that happen in the summer, but really, our default Olympics are the ones that happen on snow and ice! Now, with the games officially kicked off, here are five characteristics of any good Olympic-watching Canadian.

*Disclaimer – this post is to be taken lightly, but not too lightly. 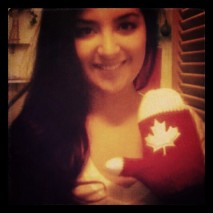 Showing off my 2014 edition gloves.

It’s almost embarrassing how seriously we take our Olympic gear. Roots, a Canadian clothing company, once became Canada’s official Olympic gear designer. The clothes they designed were so popular that the American team wanted them for their next three campaigns – this, of course, spurred us then-12 year olds to believe the Americans were our copycats for a little while. To this day, you can still spot old school Roots Olympic gear on Canadians older than 25. Fast forward a few years, and Canada’s other major Olympic clothing outlet, Hudson’s Bay Company, has gone on to make the staple Olympic mittens. In 2010, the Bay’s leaf-stamped mittens for the Vancouver Olympics were so popular that they brought them back this year in an altered designed.

It may seem sort of shallow that clothing happens to make it on the list, but the fact of the matter is, we love anything with the maple leaf on it. Thus, an excuse to put the leaf on mittens, t-shirts, sweaters, or anything, is a good enough excuse. Personally, I don’t find it strange at all that I – and some others – will be wearing these mittens (pictured above) in above-zero weather – that’s how much we love our gear.

This one is almost shameful to list, particularly as many serious hockey fans might find it irritating. However, I’ll be the first to admit that I don’t watch hockey during the year. I wish I was more of an NHL fan, that I sported my hometown‘s jersey, and that I knew the name of all the players. For a lifelong sports fanatic (who did previously thrive on hockey), it’s a strange feeling to be one of those ignorant outsiders to a sport and its current happenings, especially one that hits so close to home. Despite that, when the Olympics are on, it’s as though I’m once again 11 years old and never stopped watching. Did I also mention that in 2010, I went from hating to loving Sidney Crosby within the span of a couple of weeks? Yeah, I wasn’t the only one. 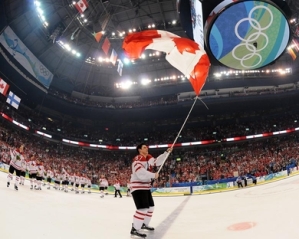 Sidney Crosby during the 2010 Games.

I have to admit, I can be terribly nostalgic – and obnoxious – when it comes to talking about the Games.

That doesn’t even begin to scratch the surface. Let’s just say that Canadians are brought up on Olympic coverage, and that we get to know our athletes extremely well for mere viewers. For that reason, we can’t help but talk about them – and our past wins – as though we earned them ourselves.

4. The Love of Coverage.

This speaks for itself.

Let’s be honest – Canada is the brunt of the joke a great deal of the time, mostly when it’s an American telling the joke. Considering this happens on internationally-popular TV shows (I have been called Robin from CBS’ ‘How I Met Your Mother’) and that there are nearly 10 times Americans as there are Canadians, you can imagine that we hear these jokes a lot. This coupled with the fact that we aren’t generally brought up to harp on about how great our country is a good reason why for 99% of the time, we cop a lot of heat. The Olympics are our reason to be more outspoken about the positives of our country, and wear our flag with pride.

Regardless of which country you’re representing/supporting this year or the unfortunate political and social problems brought fourth, the Olympics are a great time to support athletics, devoted athletes, and the spirit of sportsmanship!

Which country are you supporting? Does your country have any interesting traditions or quirks?

21 thoughts on “How To: Be Canadian During the Olympics”