Anyone who’s lived – or even been – to Spain will know that the Spanish lifestyle can easily test one’s patience. Nothing in Madrid – the capital city of the country – seems to run as fast as it would at home, so imagine what life in small-town Spain must be like! Contrary to popular opinion, I’m one to believe that learning to adapt to this slow-motion kind of life can actually do more good – rather than bad – for the soul.

Before I moved to Madrid, I often found myself having a hard time understanding why so many people couldn’t take the time to simply do what they felt at that exact moment in time. I’ve always been restless, and can often have abrupt need-to-do moments of urgency, but I’ve always thought of time as something to enjoy in the moment. This means that whether I was writing, with friends, family, or playing a sport, that nothing else would dominate my thoughts. 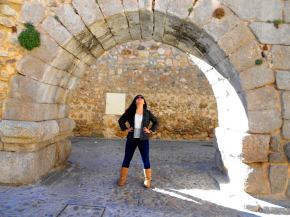 As such, living in Spain has been a wonderful reminder that some – if not many – parts of the world practice a more laid-back kind of life. In Spain, it’s completely normal to “waste away” an afternoon with a friend, whilst sitting in the blazing sun. It’s completely acceptable to have a good time for the sake of having a good time, with no real regrets as an after-math. Many of us raised on the North American lifestyle are taught to think more strictly of time, specifically when it comes to age and life achievements. As someone who had never fully agreed with certain age requirements, living in Spain has admittedly made me re-evaluate my previous beliefs. However, to be in an environment where marriage isn’t expected by the age of 25 (or even 30) is nothing but positive, as many of us still require freedom of movement.

Unfortunately, my mind never completely strays from what I want to achieve in the distant future, but Spain has made me ease up a little. When I first arrived here, I wanted to squeeze every minute for what it was worth, being the hyper-active learner I always was. A year later, I can honestly describe myself as more relaxed. Although I’ll never let myself be forgetful of my goals, I now know that it’s important to appreciate what I have now while it’s still here.

So, as every day passes me by here in Madrid, I silently wonder how I’ll re-adjust to the North American lifestyle. I secretly know, in my head and heart, that the return home has to be made sometime soon, but the thought of it frightens me every so slightly. Though I didn’t feel that way – at all – around this time last year, I’ve come to realize that Spain has shaped me, and that leaving it will be a challenge to my psyche. It’s a good thing that I like – if not need – a new challenge!