It all started with an early morning flight. My friend, Monica, and I had decided that it was worth trekking to Madrid’s airport at 5am to catch a well-priced flight to Spain’s Canary Islands. Why? We had heard the Canary Islands were magical – several different islands off the coast of Morocco in the Atlantic Ocean, where each island had something distinctly different to offer its visitors. Gran Canaria, the island we decided on, was well-known for its sand dunes. As I had visited a destination with sand dunes before, I had been aware of how much I appreciated a beautiful desert-like landscape. It was mentioned that the island of Gran Canaria (literally ‘Great Canary’) somehow had its sand dunes right next to the ocean, which seemed absolutely incredible to me.

Thus, our 4am wake-up call seemed worth it. Our flight felt longer than it was – a good three and a half hours, which is a reflection of how distant the islands are from the mainland – perhaps due to our excitement and exhaustion. When we arrived at the island’s airport on the first day, the sky was grey, and it looked as though it would be a rainy trip. Thankfully, as we headed south to Playa del Ingles in the Maspalomas region, we managed to escape any weathered mishaps. 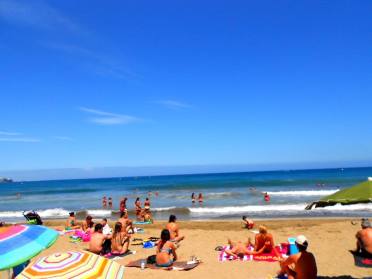 The next few days would be exquisitely beautiful. It almost felt unfair that we were lucky enough to experience constantly sunny and hot weather, yet without the overwhelming humidity or dryness that other warm regions could expect. Gran Canaria is consistently visited by Northern Europeans, and it’s not hard to understand why – it’s the perfect escape from darker skies, cold days, and depressing weather. 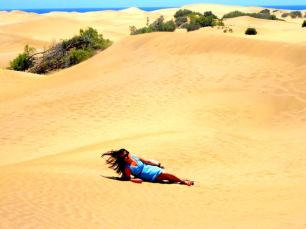 Laying on the dunes.

Unfortunately, Gran Canaria’s constant sun was much stronger than I thought it would be. I had been living in Spain since September of 2012, and came from an ethnic background where I (foolishly) assumed I was able to soak in more sun without the risk of a burn. I have been burned before, but I suppose I never really noticed as I was too caught up in being in my surroundings. In Gran Canaria, I definitely felt the burn, which taught me one big lesson: always reapply sunscreen, and never think you’re “naturally tan” enough to go without it!

Despite the little sting from the sun, the island was nothing less than perfection. Monica and I decided to visit the famous sand dunes of Maspalomas, where we walked through one very hot afternoon. On the other side of the dunes was a famous (or infamous?) beach that was welcome to nudists. Although open to different things, we walked down to Playa del Ingles (beach), where the atmosphere seemed more appropriate for us. The beach here reminded me of Malaga, the well-known beach city in the south of Spain, but with even prettier views. Island beaches usually are prettier to me, maybe because there’s really nothing but ocean around you. Regardless, I spent a good amount of time at this beach, and I still miss it.

Though Maspalomas itself is an amazing place to be if you enjoy sun and sand, there are other equally beautiful spots on the island. One day, we went to Puerto Rico and Puerto de Mogan, two other well-known beach towns. Both are located on the western part of the island, in calmer, yet also lively areas. Puerto Rico is consistently listed as the most breathtaking beach on the island, which could very well be correct. Whilst swimming in its blue waters, I noticed how amazing the view back towards the island was. It’s the kind of view any person would be relaxed by, giving it an obvious edge. Puerto de Mogan turned out to be as lovely, but in more of a port way. I could see myself going back there in 20 years, in one of its upscale and well-kept holiday apartments. 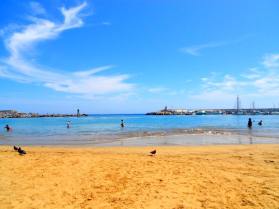 As time passed and our holiday was coming to an end, it was merely time to explore Maspalomas, swim in the pool, and get to know more about our surroundings. Funnily enough, we ended up on the island right after Gay Pride had rolled through, and were in a very gay-friendly area, giving us the opportunity to talk to locals about the island’s culture and events. I’m a straight female, but I’ve always been pro-gay rights and as such, appreciated Gran Canaria’s tolerance to its very different inhabitants and travellers. There’s always something good to be said about a place that doesn’t seem to welcome judgment, which in this world, seems to be around everywhere. 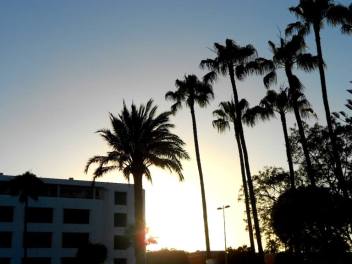 The view from the hotel’s swimming pool.

In the end, we left the island with heavy hearts. There are few places I’ve been to that can match Gran Canaria’s beauty, and I expect that I’ll always remember it. I never believe goodbyes are anything but a “see you some time in the future”, which has eased the transition from life on the island to life on the mainland. I can’t wait until I visit its vivid waters, bright blue sky, and intense sand dunes again!

Have you ever been to the Canary Islands, or any island that has taken you by surprise?