I’ve been having some strange dreams lately. When I say ‘strange’, I refer to how vivid, surreal, and aesthetically beautiful these brief portraits have been. One of these dreams made me feel oddly emotional, while another one felt completely natural. How does any of this make sense?

It all started three weeks ago, when I dreamt of being on a Spanish beach. In my mind, it must have been somewhere in Mallorca, which is an island I visited in May of 2013. In reality, I went to the island with a group of friends, and sure enough, one of my good friends happened to be in my dream. The beach was a burst of colours, with the sand being a shade comparable to only gold. The water was a beautiful blend of green and blue, whilst the sky was a burst of light. I felt at peace, as if I made some pilgrimage back to where I was meant to be. It was the kind of dream I wasn’t expecting, considering my recent decision to stay away from Spain for the time being. It’s not that I’ve ever disliked being in Spain; it’s the opposite. Yet, in the dream, I distinctly remember calling that place “home”. So, where exactly am I supposed to be?

To make things weirder, I had another dream about Spain a mere week later. This dream featured Madrid, where I lived for two years. Of course, it should have been a slightly dramatic dream. However, it was a literal walk in the park, with me strolling around the city. I looked to my left, and saw the shopping center near my apartment in the nicer part of town. I looked ahead and saw my favourite park, where I spent a lot of time getting to know new friends, my own running patterns, and generally living my Spanish life. The following morning, I awoke a lot calmer than I had following my previous Spanish-influenced dream. 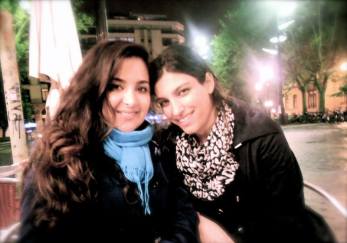 Perhaps the eeriest of all, though, was my latest dream. It was a regular night like any other, but it had been a tumultuous day. I fell asleep with a lot to think about, hoping I wouldn’t dream about anything at all. Although my day-time troubles had nothing to do with Spain, they translated perfectly to my night-time trance. This time, I found myself walking through a blend of both Seville and Barcelona. For anyone who’s travelled through either of those cities, it’s well-known that they’re quite different. Seville is where bullfighting – the controversial sport that’s been well-established in Spain – has thrived in its history. Barcelona, however, rejects the practice as barbaric, with it being banned in the community of Catalonia as a whole. So, it was especially interesting that whilst in daze, bullfighting, the scorching sun, and Barcelona’s famous city beach were all somehow combined in one. For one minute, I found myself walking through some of Barcelona’s more obviously touristy streets. The next minute, I was near Seville’s famous Triana Bridge. I was at a loss for words throughout the whole thing, unsure of where I was supposed to go next. One obvious fact remained: I kept reminiscing about Spain, whether it be its southern cities, northern retreats, or island escapes.

What still puzzles me is that I’ve yet to figure out what I should take from any of this. Do I miss Spain that much? Is this my way of telling myself to go back? Or, is it just that I’m at an unknown point in my life? Am I supposed to keep exploring? Will I ever stop wanting to be somewhere else?

I’m still not sure.

2 thoughts on “Why Do I Keep Dreaming About Spain?”

There was an error retrieving images from Instagram. An attempt will be remade in a few minutes.