Throughout my travels, I’ve been fortunate enough to meet some fellow like-minded travellers with interesting stories of their own. As someone who always likes to know someone else’s ‘story’, it’s become important to me that some of these tales be shared on the blog. Thankfully, my good friend Melissa has agreed to start off this series I aptly named ‘traveller takeover’. Melissa is a young world traveller from the United States. The rest, I’ll leave to you to learn. So, read on!

Ghezal: Why did you decide to move to Spain?

Melissa: Well to be very honest I decided to move to Spain because it was the easiest way for me to get out of the United States.  I knew I wanted to live overseas and while I preferred Germany or the UK in the end I was willing to go just about anywhere as long as it was in Europe. I felt my life in the US stagnating and wanted to do something other than just working in an office, getting married, buying a house, having a kid—you know, all the standard stuff that you’re supposed to do once you graduate college. A lot of my friends took that path and while I’m sure it made them happy, I wanted something better, more interesting than that for myself.

I was keen to study in the UK but it was prohibitively expensive and while Germany was an option, I wasn’t quite ready to go it alone as a freelance teacher.  A friend of mine had done a year on the Spanish Ministry of Education’s teaching assistant program and I thought working in a school sounded ideal—more structure than freelancing, at any rate.  I had never had any interest in Spain before—I’d been a couple of times but I wasn’t one of those people who was in love with it like so many people on the program are.  Many of the friends I made in Madrid dreamed of making it their ultimate home, but for me it was just supposed to be a first step. 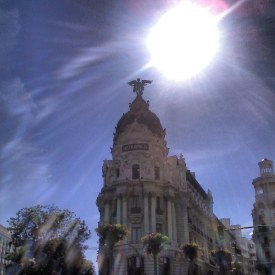 Ghezal: What were your first impressions of the city?

Melissa: I’d actually visited Madrid several years before I made my big move to the city.  On that short visit I remember getting lost on calle Atocha, climbing the trees in Retiro, and getting lost again with a friend in Huertas (except we didn’t know it was called Huertas, we simply dubbed it ‘the place with the street with the quotes on it’).

My impressions when I moved there were primarily weather-related; I thought having spent the last two years suffering through summers in Tennessee would prepare me for the heat of Madrid but they didn’t come close.  The intensity of that September sunshine is incredible—my first day back in Madrid I ventured from my hotel up to the Bernabeu and then quickly retreated back into the air conditioning.  The second summer wasn’t nearly so bad—you definitely acclimate quickly!

Other than that I remember being slightly overwhelmed by the size of the place.  I’m from a small town (a village really) in Vermont, had spent the better part of the previous ten years living outside Washington, D.C. (which, contrary to its importance, is a tiny speck of a city), and had just come from the outskirts of Nashville, so Madrid was definitely a step up, size-wise.  Luckily Madrid is very easily navigated and it didn’t take more than a few weeks to really learn my way around.

Ghezal: How much Spanish did you know before going?

Melissa: Is it possible to know a negative amount of a language?  If so then that’d be about how much Spanish I knew.  I could say hello and count to ten and that was about the extent of things. I’ve been speaking German half my life and studied Arabic and Hindi in college, but never spent so much as an hour in a Spanish class.  So I was pretty much starting with nothing.  It didn’t take long for me to reach the point where I could read (and understand) newspaper articles in Spanish, and I could watch the news on television or listen to everyday conversations and pick up on just about everything.  Speaking was a different story—even after two years in Spain I’d still freeze up when having to put together more than one or two sentences.  I always knew how to say what I wanted to say after the fact, but during a conversation I still had trouble.

Ghezal: What did you think of teaching English to Spaniards?

Melissa: I thought it was a riot, to be honest.  I’d never taught English before so I had nothing to compare it with, but every student I had was phenomenal.  My students at school were hands down the most adorable kids I’ve ever seen, and the kids (and young adults) I gave private lessons to had me in stitches. So in that regard teaching English to Spaniards was a wonderful experience.

When it came to actual teaching I felt that (in my school at least) I could have been much more effective.  Some of my 4th grade students came to me to express a concern at not learning enough in class and it broke my heart, because they wanted so desperately to improve but their lessons focused so heavily on grammar (and their classes weren’t streamed by ability, which held some students back and made others feel left behind) that they weren’t able to enjoy their lessons.  I also felt that the school’s heavy emphasis on the Trinity exam took away from their learning.  Overall while I really enjoyed teaching English at my school, there were aspects of the way that teaching was structured which I often felt frustrated with.

Ghezal: What was your favourite place (whether that be city or neighbourhood) in Spain? Why?

Melissa: I have two favorite places; Malasaña, the Madrid neighborhood in which I lived for two years, and Gijón, a city in the north of Spain. Malasaña was a comforting place to live—I was just blocks from the busy noise of Gran Via but felt like I was in a small village.  Everyone gushes about the neighborhoods’ trendy bars and vintage clothing shops but for me the draw was different: it didn’t feel like a city.  The streets wound around, there wasn’t much traffic, and it sort of felt like my own small town.  Other than going to work, I could go weeks without ever leaving it.

I visited Gijón during Semana Santa in my first year in Spain.  I recommend the city to everyone.  It’s small enough to easily navigate, it’s beautiful, the weather is ideal (well, for me at any rate, but I like a good rainy day), and it boasts one of the prettiest stretches of hiking I’ve ever seen—the Paseo Litoral de San Lorenzo.  It’s a few hours from the city to the end of the walk and back and along the way you can wander down on to the various beachheads that extend east of the city.  I made the trek alone and if there’s one experience of Spain I’ll never forget it’s sitting alone on a small stretch of sand, listening to the water lap around the rocks and watching the tide come in.  I’m always furious when I discover that someone has visited Gijón without making time for this walk!

Ghezal: Nowadays, when you think of Madrid, what comes to mind?

Melissa: When I think of Madrid I immediately think of friendship.  It sounds corny but never in my life have I had such a feeling of connecting with people as I did in Madrid.  I think the way of life in the city has such a positive effect on the time you spend with people—in the United States I was almost desperately lonely.  I had friends but they all led such busy lives that it really began to feel that none of them had time for me.  They had important jobs (or at least they worked long hours), lived too far away, had family commitments, or constantly had something going on.  Going out to lunch or visiting with someone was a huge deal for me, because it happened so rarely.  But in Madrid time felt infinite—late nights spent talking and laughing with my flatmate, afternoons at the local movie theater, lunches and dinners out several times a week, long strolls around parks, screaming my head off with friends at Real Madrid matches, random summer dinner parties, or just staying up talking until 6am with someone without anyone getting anxious about it being ‘a late night’.  There are very few memories I have of my time in Spain that don’t involve a friend’s smiling face, and that’s something I miss terribly now that I’m back in the US.

Ghezal: Would you live in Madrid again?

Melissa: In a heartbeat.  I wasn’t entirely positive on it for much of my time there (a problem I attribute in large part to my lack of language skills) but now that I’ve left I feel the pain of missing it all the time.  It wasn’t perfect but the two years I spent there were some of the most interesting and rewarding of my life.  I’ll almost certainly be back!

Ghezal: I definitely agree that the lifestyle in Madrid makes friendships much easier to foster. North American life can be too focused on the unimportant (commercial) things, whereas Madrid offers more time for socializing. I have to say, though, the weather in Madrid was ideal for me! That’s where you and I have to ‘agree to disagree’, because I can’t stand the rain!

In any case, thank you so much Melissa for sharing your thoughts. Should you be interested in following Melissa, you can find her on Twitter or Instagram!