There are some cities whose reputations surpass reality. We tend to believe that these places are going to shake us to our very core, and that we’re going to walk away remembering them for the rest of our lives. These are the heavyweights of the travel world – the cities that never sleep, and/or never cease to impress us. Sometimes, we get lucky enough to experience that indescribable feeling of euphoria; where we feel as though we made the right choice to stroll through the famous streets of a well-known place. For me, Rome was just that: as great as I expected, and something to be mesmerized by.

Although I did expect Rome to be a wonderful city to visit, I was delighted to actually be immensely impressed by it. The Colosseo (Colosseum) is intimidating from the exterior, and devastatingly real from the inside. For anyone who knows the history behind the Colosseum, it becomes clear that all those stories told to us about that era were real, and that cruelty was nothing out of the ordinary for those who partook in the gladiator games. There’s something about the Colosseum that made me feel a sense of strength, yet also a sense of great sadness.

Beyond the walls of the great Colosseum, there’s much to be found throughout the rest of Rome. One of my favourite things about the city is that it’s not just a place for glamorous travel – it has a gritty realness to it while maintaining its beautiful Italian spirit. Like many other capital cities, Rome is quite different from the rest of Italy (so I heard from the locals). As the Parisians are to the rest of France, Romans are generally looked upon in a similar fashion by other Italians.

While my friend and I walked throughout the city, we greeted some horses, saw some ruins, visited the Italian Parliament, and managed to visit a few cafes. Rome isn’t a tiny city by any means, yet it’s still very walkable. In addition to its walkability, Rome has a solid metro system in place, as well as a manageable bus system. Some parts of the city are just a little too far to walk to/from if you’re there for a short visit, so this became really useful as we wanted to see as much as we could during our trip.

One of my most favourite memories of this trip was visiting a very well-known gelateria in one of Rome’s residential areas. I’m fortunate enough to be friends with a Roman (whom I met during an extremely fun Model UN conference in New York City), so I was able to check out a couple of neighbourhoods that are purely visited by Romans. As always, I enjoyed being able to break away from the path of my fellow foreigners and see what it’s like on the other side. During that day, we stopped by a gelateria and a local shopping district. Unfortunately for me, I was greeted in Italian, and therefore embarrassed myself multiple times by not knowing how to respond. For the most part, I’ve visited places where I can either use English, French or Spanish, but Italy was its own beast. There was something respectable about this, because I finally understood what it meant to be truly lost in translation! Regardless, the gelato I sampled was delicious and reminded me of how much I prefer Italian gelato to North American-style ice cream.

One of Rome’s most famous gelateria’s.

Although it’s been a while since this visit to Rome, I remember it clearly, and would be excited to visit the city again. Because I’ve studied Italian history and culture, I appreciated the little things that much more, and felt like I was finally witnessing my school books come to life. Che bello! 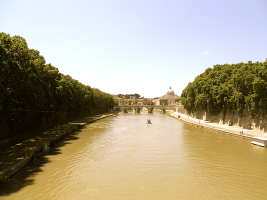 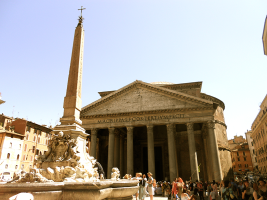 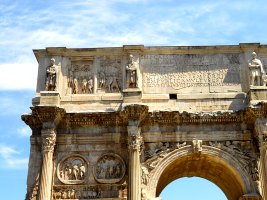