There’s nothing more mind-boggling, gratifying, and empowering than suddenly coming to the realization that you no longer feel like a foreigner in your foreign country of choice. While I’ve gone through several stages of feeling too comfortable in Spain, it’s finally dawned on me that while I know I’m not from here, it doesn’t even seem to matter to me anymore. 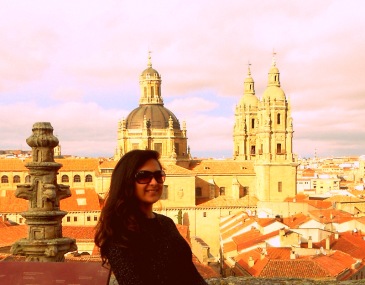 There was a time (if not many times) when I would constantly notice things around me as to be very typically Madrileño. For example, the unusually impolite nature of crowds pushing through metro exits used to be a huge pain for me. Though it’s true that I do actively avoid certain metro stations now (Sol, if I can help it), I’ve finally gotten past the point of it irking me as it used to. The metro wait-times (specifically past 9pm) have stopped being a matter of concern, as has anything transportation-wise. I’ve gotten so used to the metro system that I never look at the metro map anymore, even to go to obscure stations. Although I do still have my moments (usually on my metro ride to work in the morning), I find myself accepting something about the Madrid metro that I refused to admit before: this is the plight of big cities, and that most big cities are like this. It’s not just how things are in Spain.

I also used to notice the (previously) easily distinguishable Spanish that was all around me. Even though I had been here for several months, it still seemed strange to me to hear Spanish everywhere. Now, whenever I leave Spain, it’s weird to not hear Spanish. There was also a period of time when hearing English spoken anywhere around me instantly led to me looking at its speaker, as it stood out to me. Now, I don’t really separate the two. Though Spanish is technically my fifth language, it’s embedded in my brain in ways English is, which is nothing short of linguistic success to me. It’s dawned on me that it will probably be very hard for me to disconnect from Spanish, at least in terms of lifestyle. It’s been impossible for me to forget French, thanks to my upbringing and lifelong education in the language, but Spanish has been a relatively new introduction into my life. I wouldn’t want to abandon it, which has only furthered my inner desire to eventually relocate to Southern California.

There’s been one other strange new revelation in my life: for the first time ever, I feel like I connect to my students in ways I never did before. As I’ve mentioned in previous posts, I’ve been “teaching English” for about a year now. I used to always feel like a foreign teacher to my students, as though they were something very distinct and very Spanish to me. However, in recent times, I’ve realized that I no longer feel this way. While my students are still Spanish, I look at them differently from how I looked at my past students. The kids I teach and interact with every day aren’t just foreign (to me), they’re regular kids like any kid at home is. They have the same thoughts, the same needs, only in Spanish. For some reason, this has only just begun to click in my head. It’s a nice feeling, and another first for me here in Spain.

It’s hard to truly explain what it’s like to live abroad, yet not feel like you live abroad anymore, but this is my attempt. Madrid has felt like home for a while now, but I’ve built a bond to it that seems stronger than ever. My life is here, for the time being, and I’m completely content with that. I no longer feel reluctant to say I like the city, but instead say it with pride. It may seem normal, but compared to how I felt during much of last year, it’s a relief to finally be at peace with myself in Spain.

Have you ever lived abroad? What were your experiences like?

4 thoughts on “At the Point: Of No Longer Feeling Foreign”